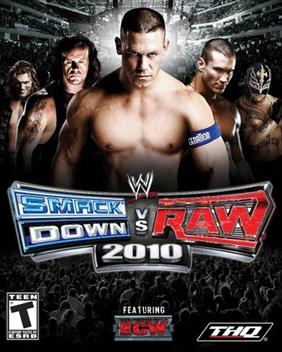 In addition, five World Wrestling Entertainment® Superstars will be featured on the cover of WWE SmackDown vs. Raw 2010. John Cena®, Undertaker®, Randy Orton®, Edge® and Rey Mysterio® will headline the new game, which promises to deliver player freedom never before experienced in the SmackDown vs. Raw franchise. More information about WWE SmackDown vs. Raw 2010 will be unveiled surrounding SummerSlam®, live on pay-per-view August 23, 2009 from the STAPLES Center in Los Angeles, Calif.“John Cena, Undertaker, Randy Orton, Edge and Rey Mysterio are incredible WWE Superstars who represent the athleticism, creativity, individuality and strength of today’s live WWE programming,” said Brian Coleman, vice president, global brand management, THQ. “These powerful traits symbolize our vision to give players extensive creative freedom and make WWE SmackDown vs. Raw 2010 the most authentic, entertaining and compelling simulation of live WWE programming to date.”

“The WWE SmackDown vs. Raw titles keep getting better and better, and we are honored to have such incredible classic Superstars as John Cena, Undertaker, Randy Orton, Edge and Rey Mysterio on the front cover of WWE SmackDown vs. Raw 2010 for all platforms,” said Nelo Lucich, senior vice president of interactive, JAKKS Pacific. “Their intensity and commitment to wrestling excellence epitomize the spirit of this year’s videogame.”

WWE SmackDown vs. Raw 2010 will be supported through a look at SmackDown vs. Raw franchise history at E3 2009 in the THQ booth – number 5300 in the West Hall of the Los Angeles Convention Center. In addition, WWE Superstar Kofi Kingston™ and current WWE Divas Champion Maryse™ are scheduled to sign autographs on Tuesday, June 2 from 2:00 p.m. to 3:30 p.m., while WWE Superstar John Morrison™ is scheduled to sign autographs on Wednesday, June 3 from 2:00 p.m. to 3:30 p.m.

More information about the WWE SmackDown vs. Raw videogame franchise can be found at www.smackdownvsraw.com and www.thq.com.

Microsoft, Xbox, Xbox 360, Xbox Live, the Xbox logos, and the Xbox Live logo are either registered trademarks or trademarks of Microsoft Corporation in the U.S. and/or other countries.

Wii and Nintendo DS are trademarks of Nintendo.

The statements contained in this press release that are not historical facts may be “forward-looking statements” within the meaning of the Private Securities Litigation Reform Act of 1995. These forward-looking statements are based on current expectations, estimates and projections about the business of THQ Inc. and its subsidiaries (collectively referred to as “THQ”), including, but not limited to, expectations and projections related to the release of the WWE SmackDown vs. Raw 2010 videogame, and are based upon management’s current beliefs and certain assumptions made by management. Such forward-looking statements are subject to risks and uncertainties that could cause actual results to differ materially from those expressed or implied by such forward-looking statements, including, but not limited to, business, competitive, economic, legal, political and technological factors affecting our industry, operations, markets, products or pricing. Readers should carefully review the risk factors and the information that could materially affect THQ’s financial results, described in other documents that THQ files from time to time with the Securities and Exchange Commission, including its Quarterly Reports on Form 10-Q and Annual Report on Form 10-K for the fiscal period ended March 31, 2009, and particularly the discussion of risk factors set forth therein. Unless otherwise required by law, THQ disclaims any obligation to update its view on any such risks or uncertainties or to revise or publicly release the results of any revision to these forward-looking statements. Readers are cautioned not to place undue reliance on these forward-looking statements, which speak only as of the date of this press release.

This press release may contain forward–looking statements (within the meaning of the Private Securities Litigation Reform Act of 1995) that are based on current expectations, estimates and projections about JAKKS Pacific’s business based partly on assumptions made by its management. These statements are not guarantees of future performance and involve risks, uncertainties and assumptions that are difficult to predict. Therefore, actual outcomes and results may differ materially from what is expressed or forecasted in such statements due to numerous factors, including, but not limited to, those described above, changes in demand for JAKKS’ products, product mix, the timing of customer orders and deliveries, the impact of competitive products and pricing, and difficulties with integrating acquired businesses. The forward-looking statements contained herein speak only as of the date on which they are made, and JAKKS undertakes no obligation to update any of them to reflect events or circumstances after the date of this release.